Lionel Messi called it quits from international football after Argentine lost the Copa America final to Chile 2-4 on penalties.

In an interview to TyC sports after the game, he said he would no longer play for the national team.

“For me the national team is over,” the crestfallen 29-year-old told reporters.

“I’ve done all I can, I’ve been in four finals and it hurts not to be a champion.

“It’s a hard moment for me and the team, and it’s difficult to say, but it’s over with the Argentina team.” They were beaten 1-0 by Germany in the final of the World Cup in 2014 and lost on penalties, also to Chile, in the final of the 2015 Copa America. The 29-year-old’s decision comes three days after he spoke of not being happy with the Argentina Football Association. 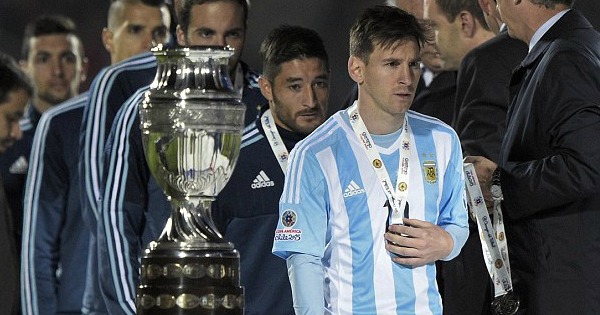 AFP The game itself was nothing to write home about for the skipper as he missed a penalty in the shootout.

BREAKING: MESSI HAS DECIDED TO RETIRE FROM INTERNATIONAL FOOTBALL.

FIFA Council have approved a 48-team World Cup from 2026

Stats : Lionel Messi vs Cristiano Ronaldo in pictures since 2004

Kohli : India not play for rankings

The watch case has a rolex replica total case diameter of 43 mm and is crafted in omega replica exquisite 18K rose gold. The middle layer of the watch is replica watches finely finished with a satin finish. The bezel is polished and the bottom cover of replica rolex the watch is hand-engraved.